What railroad employees need to know about protecting themselves legally and financially in the event of a railroad grade crossing collision:

Before You Hit the Road!

Get Uninsured Motorist and Personal Injury Protection on Your Own Auto Insurance Coverage.

We recommend that railroad conductors and engineers all opt in for substantial Uninsured Motorist and Personal Injury Protection on their own personal auto insurance. It's a little known fact that most UM/UIM or PIP policies should cover you in any motor vehicle accident even if you are not in the insured vehicle when the wreck occurs. This includes your train, since an engine is legally a motor vehicle, when it is involved in an accident with a truck who illegally fouls the track.

Even though eighteen wheelers and other large commercial trucks are required to carry more insurance than regular passenger vehicles, in many grade crossing collision cases the damages may exceed the policy limits. In some instances semi-trucks are only required to have about $750,000 in liability insurance. The train's property damage alone may exceed this amount since most locomotives are valued well over $1 million dollars. Learn more about UM/UIM and PIP for railroad workers>>

Note: Before purchasing additional UM/UIM/PIP, please confirm with your insurance agent that their insurance will cover you in a van wreck and train wreck while at work for the railroad.

If you are in a crossing collision:

Make note of these vital pieces of information if possible:

Clearly, if you are badly injured you may not be able to do anything except wait for or seek medical attention. However, if you are able to note any of the information below it will aid in the speedy investigation of your case: 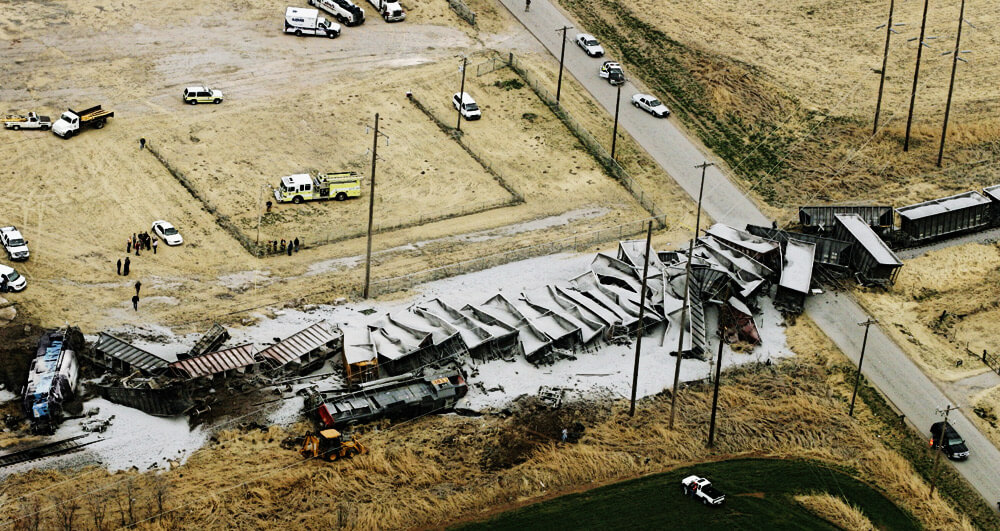 Make your crossing collision claim as soon as possible:

Here are three reasons we recommend starting your crossing collision claim as soon as possible:

After handling hundreds of grade crossing collision cases for injured railroad workers, we have developed an extremely successful protocol that helps maximize the recovery for the injured railroad employee.

When involved in a crossing accident, critical decisions must be made to ensure the best possible results for physical and financial recovery. Handling multiple defendants and insurance companies can be a big challenge. If you are a trainman injured in a railroad crossing accident, it's important to work with a FELA Attorney who has extensive experience in these types of collisions. See the bottom of the page for railroader crossing collision testimonials. You may also Contact us today for references from satisfied grade crossing collision clients.

The first thing we do is act immediately to preserve evidence that may not be available if aggressive action is not taken. Filing an immediate lien letter with the trucking company puts them on notice to preserve driver's logs, cell phone records, GPS records and truck event recorders.

Truck event recorders and dash cam videos in particular are often overwritten if this information is not specifically requested and eventually ordered to be shared by a court of law. This evidence can help prove that the trucking company was not only 'negligent' but 'grossly negligent' which will help minimize any arguments that the railroader was contributorily at fault and maximize injured railroad worker's recovery in mediation or at trial.

Here are a few case summaries from some of the 100s of grade crossing collision cases we have handled over the years.

As a result of the injury, the KCS engineer needed an operation on his back and could not return to work. The trucking company and KCS claimed the employee’s injury was not caused by the wreck and that the railroad worker could still hold a job. The case was settled approximately one (1) year after the injury. The railroad worker was represented by Mr. Bristol Baxley. Mr. Baxley is a partner in the law firm of Rome, Arata & Baxley. Hill v. Savage Industries et al.

A UP engineer, conductor and brakeman were seriously injured in a grade crossing collision in Canadian County, Oklahoma when a dump truck hauling a load of sand drove in front of their train. In the ensuing derailment, the engineer sustained life threatening injuries, including a burst fracture to his spine. The conductor also suffered severe injuries to his back and other parts of his body. The brakeman suffered herniated disks in his neck as well as puncture wounds and lacerations. Prior to the collision, the KCS engineer was blowing the horn and ringing the bell. The trucking company blamed the layout of the crossing and the KCS crew.

As a result of his injuries, the engineer underwent emergency surgery to repair the damage to his spine and could not return to work. The conductor underwent multiple back surgeries and was also unable to return to work. Due to his injuries, the brakeman was unable to return to his job at the railroad. The case was settled about 1 year and 6 months after the accident. Further, as part of the settlement agreement, UP paid all of the Railroad Workers’ medical bills. The Railroad Workers were represented by lead attorney, Mr. Bristol Baxley of the law firm of Rome, Arata & Baxley. Smith, et al. v. Schwarz Ready Mix & Union Pacific, et al.

A 59 year-old Amtrak on board employee suffered a back injury in a grade crossing collision. The train derailment was caused by a tractor-trailer that drove in front of the train. The injury resulted in a back surgery.

The trucking company and Amtrak claimed the employee’s injury was not caused by the wreck and that the railroad worker could still hold a job. Mims v. National Railroad Passenger Corporation d/b/a Amtrak et. al. The Railroad worker was represented by Mr. Bristol Baxley of Rome, Arata & Baxley.

As a result of the injury, the KCS engineer needed an operation on his neck and could not return to work. The City of Denton and KCS claimed the employee’s injury pre-existed the wreck and accused him of fraud. After initially agreeing with the engineer’s memory of the incident, the Conductor in the case changed his story and claimed that the collision would not have spilled a coke and further, that the Engineer remained seated the entire time. The City of Denton and KCS also spent over $70,000 on expert testimony trying to prove their case. All of these experts testified that the accident in question could not have caused the type of injuries suffered by the Engineer.

The Judge in the case found the City 90% at fault for causing the accident. He also found the railroad 10% at fault because the Conductor saw the approaching truck was not going to stop but did not warn the Engineer. The judge awarded damages for the Engineer’s injuries including past and future lost wages, pain and suffering and medical bills.

The Plaintiffs, a thirty-two year old conductor and a forty-two year old engineer for The Kansas City Southern Railway Company, suffered injury when struck by a tractor-trailer while operating a locomotive. The wreck occurred when the driver of the tractor-trailer stopped his truck on the KCS tracks directly in the path of the on-coming train. The train was blowing its horn and had all of its warning lights on. As a result, the engineer had to undergo back surgery and will never return to the railroad. The conductor underwent surgery and is unable to return to work for the railroad.

If you'd like additional information on results obtained for railroad workers involved in grade crossing collisions please call us at toll free at 1-866-993-0001. 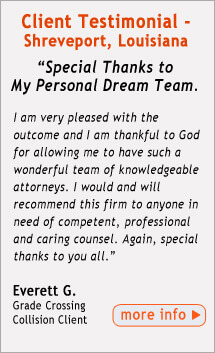 We handle FELA/Railroad Injury cases across the United States. However, the bulk of our cases are in Texas and Louisiana and especially in these cities: