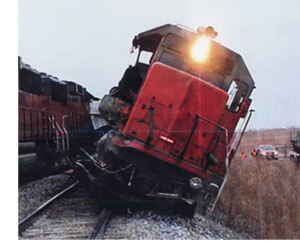 Train to train collisions can involve staggering amounts mass and momentum. Thus, they are extremely dangerous. Typical types of train collisions are head-on collisions, rear end collisions, raking or side swipes, and hard couplings, In most of these cases the railroad will immediately blame all or some of the crew members involved.

If you have been injured in train to train collision it's important to choose a railroad injury attorney knowledgeable of the FRA rules on Shoving and Pushing Movements, the FRA Radio Rules (see 49 CFR 240) and the Locomotive Engineer Rules - especially the rules regarding occupying main track without authority. Also, dispatcher rules often come into play.

The Plaintiff, a thirty-one year old engineer for The Kansas City Southern Railway Company, suffered a back injury when a KCS freight train ran into the back of the locomotive he was seated on without any warning. KCS found its employees violated rules and caused the wreck at issue. The engineer underwent back surgery and will never return to his normal railroad job. R. Bailey v. The Kansas City Southern Railway Company, Circuit Court of Jackson County, Missouri. Bristol Baxley of Rome, Arata & Baxley for the Plaintiff/Engineer.

The Employee, a thirty nine year old welder, sustained a back injury when a hi-rail vehicle crashed into the welding truck he was standing behind. The collision knocked the welding truck backwards, hitting the employee in the low back and knocking him onto the ballast. The railroad suspended the employee who drove his truck into the welding truck. Defendant contended employee was at fault for failing to stand clear of the track. Employee returned to work for a number of months following his injury. Eventually employee’s condition deteriorated to the point where he could no longer work. Employee underwent a one-level spinal fusion. Defendant called Dr. Craig Ponder to testify live at trial. Dr. Ponder contended that employee had not suffered a herniated disc and that surgery was unnecessary. Defendant also called William Quintinilla, vocational rehabilitation expert, to testify live that employee could still earn substantial wages. 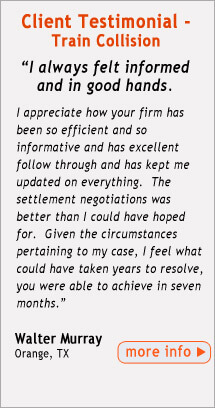