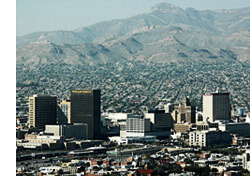 Rome, Arata and Baxley is proud to defend the rights of El Paso area railroad workers. We have successfully handled railroad injury cases in El Paso county against Union Pacific, BNSF and Amtrak. The railroads that service the El Paso area recognize our name and know that it means that the injured worker is represented by one of the best FELA attorneys in Texas and the entire United States.

We are extremely proud of the results we have achieved for our El Paso area FELA clients. Please feel free to ask us for a referral and we will put you in contact with one or several of our satisfied FELA clients from El Paso or the surrounding areas.

El Paso County as a Venue

El Paso's population and jury pool is a reflection of its location and its economy. Like other cities in the Southwest United States, El Paso is predominantly Hispanic, and its population comprises many recent immigrants, especially from Mexico.

El Paso is an important entry point to the U.S. from Mexico. Because of this, the U.S. federal government has a strong presence in El Paso to manage its unique issues as a border region. The military is another major contributor to El Paso's economy and as of 2011 Fort Bliss was the largest employer in El Paso. Education, is another driving force in El Paso's economy. It is home to the University of Texas at El Paso and El Paso's three large school districts are also top employers in the region.

More than 70 Fortune 500 companies have offices in El Paso, including The Hoover Company, Eureka, Boeing and Delphi. Due to El Paso's large bi-lingual population it plays hosts to numerous call centers such as EchoStar, MCI/GC Services and West Telemarketing.

History of Railroads in El Paso

Corporate mergers have consolidated the railroad industry into a few major players. Railroads currently operating in the El Paso area include: Union Pacific Railroad is the corporate heir to the Southern Pacific and Missouri Pacific railroad systems among others. As such, they have been operating railroads in El Paso since before the turn of the last century.