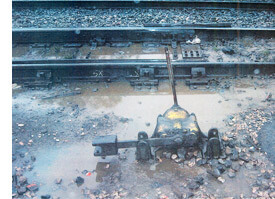 Railroads are famous for putting profit before safety. Defective switches often go un-repaired despite numerous reports that they are unsafe. This is true despite the FRA's Yard Safety Study, which found that lining switches accounted for 11 percent of the injuries. Railroad workers through no fault of their own can injure their backs, knees and shoulders etc... when they are required to throw defective switches.

In the event, that you are injured while throwing a defective switch at work, consult an FELA injury attorney experienced in handling of switch throwing cases. Contact us today for references from satisfied clients injured by defective railroad switches.

The Plaintiff, a fifty-six year old conductor for Union Pacific Railroad, suffered an injury throwing a defective switch which has bad drainage. While lining the switch, the conductor’s foot slipped causing him to fall onto asphalt, injuring his low back. He slipped because the footing around the switch in question was muddy. The dangerous footing conditions and unsafe switch conditions the conductor encountered had been reported to the UPRR. The conductor and his co-workers had complained about these conditions. UPRR refused to do anything to remedy these safety hazards. According to its own inspection records, UPRR failed to even inspect the switch.

As a result, the conductor suffered a serious injury to his lower back. He had a previous back injury in 1987 which was unrelated to work. He underwent back surgery and returned to work symptom free. He was symptom free until February, 11, 2004, the day of his injury. After conservative treatment failed, his doctor performed back surgery. Due to his injuries, the conductor was unable to return to his normal job at the railroad. Harper v. Union Pacific Railroad Co., Jefferson County (TX) District Court. Bristol Baxley of Rome, Arata & Baxley for the Plaintiff/conductor. 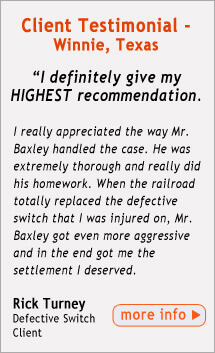