Hallcon Hallcorn corporation, based in Toronto, Ontario and Lenexa, Kansas, provides crew and employee transportation to railroads, and other industries including oil and gas, mining, airline and even commuters. Hallcon also provides cleaning and maintenance services to municipal, regional, and national passenger rail and transit providers in North America.

In 2013, Hallcon bought Renzenberger, which had provided van transportation for railcrews since 1983. The merger created one of the largest crew transportation companies for railroads in the United States.

A tragically high percentage of railroad injuries occur in railroad van accidents. Railroad vans are sometimes poorly maintained and in shoddy condition. The drivers are often undercompensated and overworked. Also, railroaders are often transported late at night when drunk and fatigued drivers may be a problem.

Experience against a particular defendant is important when choosing a lawyer. Our railroad accident firm has successfully represented many railroaders injured in Hallcon van wrecks.

Thirty-four year old railroad engineer suffered serious low back injury while riding as a passenger in railroad carry-all van when the driver accelerated off a curb. Upon impact the engineer immediately felt pain in his lower back. The engineer continued to work for several weeks despite his pain. The van driver failed to use a level driveway to exit the rail yard to the street. Also, the van driver had a reputation as a lead-footed driver. As a result of his injuries, the injured railroad worker had to undergo back surgery and was unable to return to his normal job at the Railroad. The Railroad and the van company argued driving off a curb from a rail yard is not unreasonable. The Defendants disputed the extent of the engineer’s injuries, blamed degeneration and claimed that he could return to work making substantial wages. Chris Dowdy v. Hallcon, Crane and The Kansas City Southern Railway. Bristol Baxley of the law firm of Rome Arata and Baxley, Houston, Texas, represented the injured railroad worker. 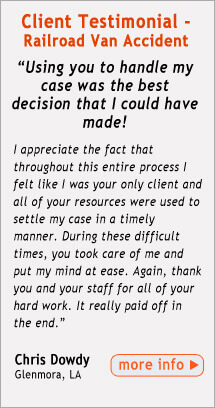