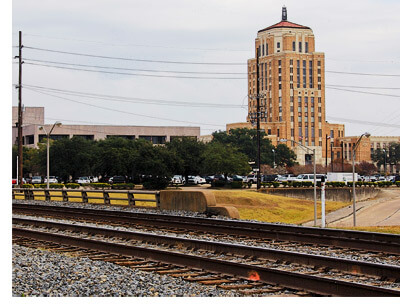 Rome, Arata and Baxley is proud to spend so much of our time protecting the rights of Beaumont and Port Arthur area railroad workers. We have successfully handled railroad injury cases in Jefferson county against Amtrak, Kansas City Southern, and Union Pacific.

We are extremely proud of the results we have achieved for our Beaumont area clients. The Beaumont area railroads recognize our name and know that it means that the injured worker is represented by one the best FELA lawfirms in Texas. Please feel free to ask us for a referral and we will put you in contact with one or several of our satisfied FELA clients from Beaumont, Port Arthur, Orange or the surrounding areas.

Jefferson County as a Venue

Jurors in the Golden Triangle have a unique perspective on railroads. Most folks in the Beaumont-Port Arthur area have at least one family member who has worked in the petrochemical plants. Almost every plant in the Golden Triangle is serviced by one or more railroads. Getting a close up view of the work involved in the switching of tank cars familiarizes people in Jefferson County with the dangers of railroad work and the importance of railroad safety. Even those folks in Beaumont and Port Arthur who haven’t seen switching work done up close will have lived by or driven by tracks carrying railroad chemical cars for years and must know that it is the railroad worker who ensures the safe passage of these dangerous chemicals through their community. These personal experiences that many people in Beaumont have with railroads can be very important in any case where the railroad has put profit before safety.

History of Railroads in Beaumont and Port Arthur

The Golden Triangle area has been vital to the industrial development of Texas and moreover the entire United States. Since oil was discovered in 1901, Beaumont has been a player in the energy industry. By then, Beaumont already had rail lines serviced by the Southern Pacific, Kansas City Southern, Atchison Topeka and Santa Fe, and Missouri Pacific railroad systems. As the petrochemical industry in Beaumont and Port Arthur grew, these railroads thrived.

Corporate mergers have consolidated the railroad industry. Railroads currently operating in the Beaumont and Port Arthur area include: 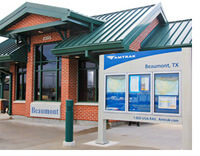 Amtrak, the national passenger railroad, serves Beaumont via the Sunset Limited which runs from Los Angeles to New Orleans mostly along the I10 corridor. The Beaumont Amtrak Station is located at 2555 West Cedar Street, Beaumont, TX 77704. It is an unmanned station and tickets must be purchased online or at another Amtrak station.

KCS's Beaumont operation has become even more important since NAFTA was passed in 1994. KCS Railroad has historically connected Northern markets to the port cities on the Gulf of Mexico. After NAFTA, they acquired the Tex-Mex railroad and trackage rights over Union Pacific track. Beaumont is where the old KCS now meets KCS's Tex-Mex railroad operation.

Union Pacific Railroad is the corporate heir to the Southern Pacific and Missouri Pacific railroad systems among others. As such they have been operating railroads in Beaumont since before the turn of the last century. 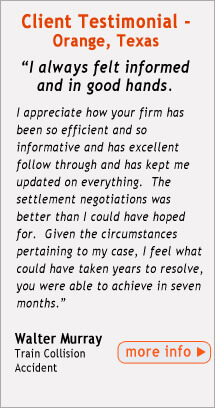